Back in high school, one of my art teachers would incessantly say, “you have to work with a medium 15 times before you become proficient with it.” Considering that this is an art blog, I’ve most likely mentioned this idea before (I’ll post a link to it here if I find it later). However, since practice does make perfect, the concept is worth repeating. 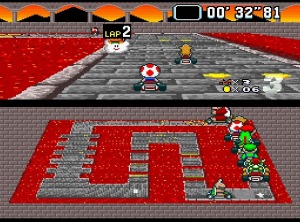 The game that started it all: Super Mario Kart

And it’s not just fine art that this principle applies to. Sound mixing, video editing, feature writing, public speaking all rely on the creator’s refined skills and attention to detail for a quality final product. Plus, cross-training benefits people in creative fields by widening their problem solving skills and perspective.

Why bring this up? Well, I was playing  Mario Kart 64 today, since

it was Snowmaggedon in the Rochester, NY area, and I realized: the evolution of this game series parallels the development of an artist’s technique and skills.

At first, with Super Mario Kart on the SNES, you got the general shapes and colors of characters and environments, in a 16-bit format. With the arrival of Mario Kart 64, characters now had multiple sound bites, polygons were used to make rudimentary 3D environments, and developers were able to create more unlockable secrets. 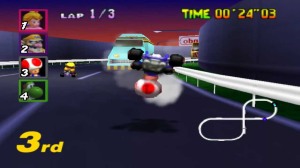 In each new iteration of the game, its evolution was visible and obvious. Additional characters, more options for karts, new game mechanics, new maps based on other games from the current system, and updated versions of old courses.

Now, at Mario Kart 8, we have the first High-Definition game in the series, complete with bump mapping, which gives the game its most detailed textures yet, depth of field, and game mechanics that allow you to toggle with gravity. With each new installment, the series improves and introduces new concepts, designs and mechanics.

Likewise, when you are learning how to use a new medium, you start off with the 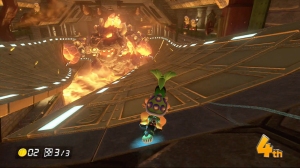 You can now play as the Koopalings in the franchise’s latest installment, Mario Kart 8

fundamentals. The Elements of Art and Principles of Design take on refined roles as you learn, through doing, how to create nuances and, in the case of fine arts, realism. A painting starts off as a bunch of flat, abstract shapes, and slowly has sections filled in, layer by layer. As you continue to practice your craft, building on what you have already established, you develop your own style and tricks of the trade.

Which is why you always have to keep scumbling on.